Fellows’ Compound Syrup of Hypophosphites was widely marketed to physicians, not consumers, as a remedy for many illnesses.  It was a commercial success, even though it contained strychnine, a potent poison, and likely made its customers sicker. 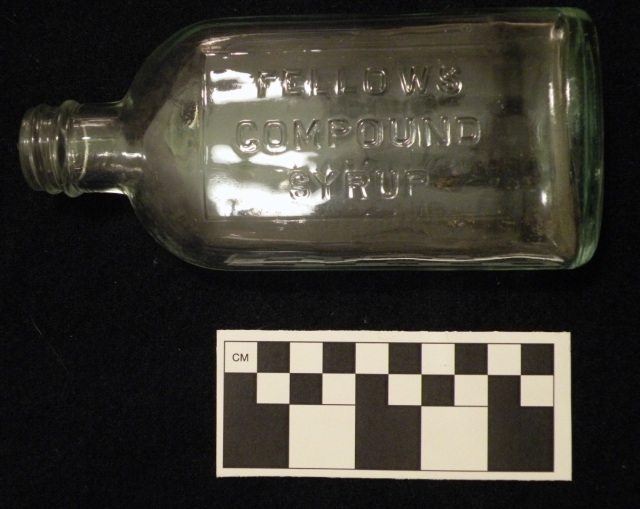 Fellows Compound Syrup of Hypophosphites was invented by James Fellows who worked with his father as drug merchants in St John, New Brunswick, Canada.

According to blogger Mary Fran Stotler, “James along with his father were listed as drug merchants in St John in 1850. He worked in his chemist’s shop at 56 Germain Street in St John. Together they established “Fellows & Company” producing household remedies such as Fellows’ Worm Lozenges, Fellows’ Speedy Relief, Fellows’ Dyspepsia Bitters, Fellows’ Golden Ointment, Fellows’ Leemings’ Essence and Fellows’ Balsam Liverwort & Colts Foot. It was here that James developed his formula for the well known, “Fellows Compound Syrup of Hypophosphites.” Patented and internationally recognized as an effective remedy, it is listed in many medical books of the period as “an excellent recuperative tonic”. An advertisement found in International Clinics Quarterly, Vol 3 dated 1905, Fellows Syrup was used “in the treatment of anemia, neurasthenia, bronchitis, influenza, pulmonary tuberculosis and wasting diseases of childhood, and during convalescence from exhausting diseases.” In the ad, there is a reference to the ingredient Strychnine, which is an exceptionally bitter tasting and extremely powerful poison. It acts on the central nervous system, causing powerful convulsions. It was used in some medications in the late 1800’s. In an article in the Canadian Illustrated News dated December 16, 1871 , it mentions that James himself had been a victim of “secondary stage”, pulmonary consumption and use of his own preparation had cured him.  Following the death of his father, James moved to London, England where he lived with his family. From there, through a judicious system of advertising and an energetic method of doing business, he established a most flourishing and lucrative business in the sales of his Syrup of Hypophosphites. He returned to St. John on several occasions, renewing old acquaintances. But his failing health made him an invalid and he died in 1889. The St John Globe records him as a man of fine presence, affable and courteous and of a most friendly disposition. ”

This passage in Mary Fran Stotler’s blog also appears on a genealogy page but no direct sources are cited, other than the mentioned articles, and other records about James Fellows’ life seem to be unavailable.

Interestingly, the sentence from the above passage “Patented and internationally recognized as an effective remedy, it is listed in many medical books of the period as “an excellent recuperative tonic” is misleading.  While it may have appeared in many medical books, this is by no means a guarantee of it being an “effective remedy”.  Many dishonest purveyors of ineffective or harmful concoctions (aka nostrums) routinely published their own advertisements and favorable articles in medical journals to misinform doctors as well as patients.

According to James Harvey Young, author of The Medical Messiahs: A Social History of Health Quackery in Twentieth-Century America, “Being the chameleon-like creature that it is, quackery continued growing during the late 19th century by taking advantage of orthodox medicine’s promising prospects as well as its persisting weaknesses. For one thing nostrum makers began to simulate the methods by which medical and pharmaceutical science kept the profession informed of new developments, turning the doctors themselves into unwitting allies in the campaign to reach the public. Articles were planted in medical periodicals reporting exciting therapeutic advances. The names of the new remedies had a scientific lilt, and complex (if nonsensical) formulas were revealed. Reprints were mailed to doctors, who soon were visited by detailmen, talking as knowingly as did the agents of reputable pharmaceutical manufacturers. The truth was, however, that the first prescription which a doctor wrote for products like Fellows’ Syrup of Hypophosphites was apt to be the last. When the sufferer looked at the printing on the carton and the pamphlets packed within it, he found enough medical advice in vigorous, down-to-earth, and frightening prose to let him dispense with a doctor. As late as 1915 Fellows’ proprietary syrup was still being promoted exclusively to physicians, with not a cent spent on direct advertising to the consumer, but 90 per cent of its sales were over the counter without a prescription.”

A Social History of Medicines in the Twentieth Century: To Be Taken Three Times a Day by John Crellin, Dennis B Worthen CRC Press, Apr 22, 2004

Plain rules for the guidance of invalids with directions for using Fellows’ compound syrup of hypophosphites by James I. Fellows 1877

A Few Remarks Upon Fellows’ Hypophosphites of Quinine, Strychnine, Iron, Lime, Potassa, and Manganese: For the Medical Profession (Google eBook) James I. Fellows, 1881 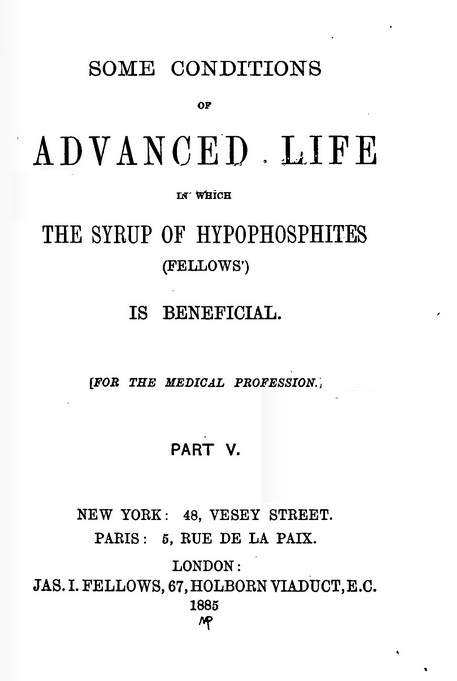 An advert from 1899 for one of Fellows & Co.’s American agents 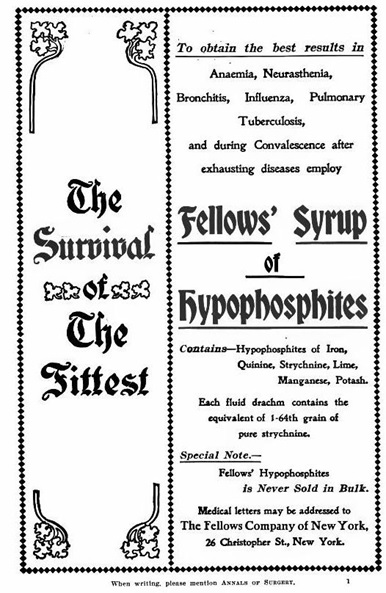