Founded by Charles Ira Hood in 1875, C.I. Hood & Co. of Lowell, Massachusetts was among the largest patent medicine companies in the United States and offered a number of personal health products in addition to its well known Hood’s Sarsaparilla.  The C.I. Hood and Company was a leader in the development of color lithography as an advertising tool, and produced all of its advertising in-house and owned twenty presses issuing a plethora of colorful trade cards, posters, calendars, cookbooks, pamphlets, and other ephemera all promoting the medicinal benefits of company products.

According to Richard Howe, “In 1876, Charles followed the lead of J.C. Ayer & Company and began to compound his own sarsaparilla medicine. In addition to sarsaparilla root, he mixed in dandelion, gentian, juniper berries and 18% alcohol. He claimed great success in curing a variety of disorders including “purifying the blood”, heart diseases, dropsy, rheumatism and scrofula. Within two years of launching his product he was on his way to great success. Charles Hood added to his success with Hood’s Tooth Powder, Vegetable Pills, Oil Ointment, Medicated Soap, Dyspeplets (for dyspepsia), TusSamo (for cough) and Hood’s Lotion.

Business was so brisk that Charles Hood needed a larger space. In 1882, he built the four-story Hood’s Laboratories on Thorndike Street, close to the Boston & Lowell railroad depot. He enlarged the laboratories in 1892 and 1897, giving him 175,000 square feet devoted to the manufacture and sale of patent medicines. The first floor was used for storage and freight shipments. The railroad station was easily reached through the back door. The second floor had the advertising and printing offices. All advertising was done on the premises. Here Hood’s printed its calendars, lithographic trade cards and cookbooks. In 1879, seventy million pieces were printed and delivered from these offices. C.I. Hood was the largest single user of the U.S. Mail in Lowell. In addition, C.I. Hood advertisements regularly appeared in newspapers coast to coast. The third floor had the counting room, boiling area and the automatic bottle filler, capable in 1884, of filling 10, 000 bottles a day, and more in later years. The fourth floor held the giant tanks, capable of filling 240,000 bottles.”

The front of this card depicts a cherub with wings blowing on a long horn and holding a box of Sarsaparilla. The bottom caption reads “Hood’s Sarsaparilla, Purifies the blood, Creates a appetite, makes the weak strong and builds up the system. Prepared only by C.I. Hood and Co. Apothecaries, Lowell, Massachusetts. The reverse of the card states “Purify Your Blood. The importance of a proper purification of the blood should induce all to use means to secure the health and happiness resulting from pure blood and a normal condition of the entire human organism. When this vital fluid is contaminated, diseases of various kinds present themselves, such as a feeling of general debility, weakness, loss of appetite, dyspepsia, nervousness, constipation, headache, and the more positive signs of blood impurities, Scrofula, Salt-Rheum, Cancerous Humor, Scald Head, Boils, Scrofulous Humor, Syphilitic Affections, Cancerous Bones and Etc. At this very time the sufferer is looking for some way of relief, and just here we wish to ask attention to Hood’s Sarsaparilla and the wonderful record it has made in purifying the blood of hundreds of sufferers and bringing back to them the boon of health. Hood’s Sarsaparilla is a carefully prepared extract of the best remedies of the vegetable kingdom known to medical science as Alternatives, Blood Purifiers, Diuretics and Tonics, such as Sarsaparilla, Yellow Dock, Stillingia, Dandelion, Juniper Berries, Mandrake, Wild Cherry Bark and other selected roots, barks and herbs.” The price is one hundred doses, $1.00 and six bottles $5.00. 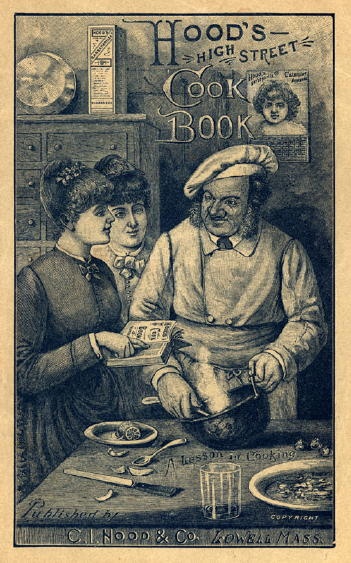 1885 High-Street Cookbook, published by the ladies of the High-Street Church. Lowell, Massachusetts. C.I. Hood Co. republished this as an advertisement booklet for its bestselling blood-purifying medicine, Hood’s Sarsaparilla. Mentioned at the end of each recipe, this cure was a mixture of sarsaparilla roots and dandelion, along with 18% alcohol. Read by a wide-cross section of consumers, mass media almanacs played a major part in disseminating health care information to the general public.

Hood’s Sarsaparilla advertisement booklet by Bunner, H.C. “The elephant’s love or Zenobia’s infidelity. Presented with the compliments of C.I. Hood & Co. proprietors of Hood’s Sarsaparilla. Lowell, MA” No publisher, 1891. Each page of this “comic” tale of a misguidedly affectionate elephant is ruled, with a testimonial to the medical benefits of Hood’s Sarsaparilla appearing below that; a reprint from Puck (edited by Bunner) and Short Sixes, it is illustrated with a number of small cuts, its pale green paper wrapper bearing two larger ones. 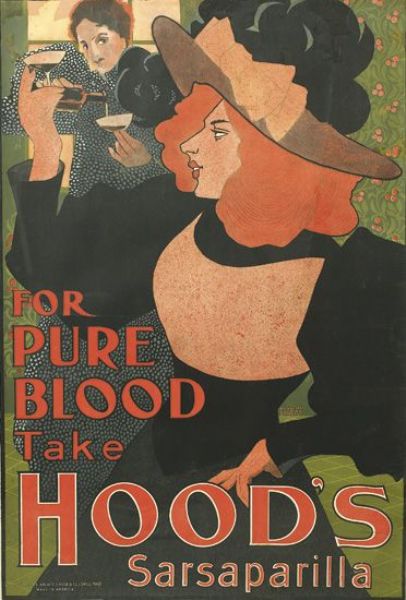